strong competitor with a bombastic personality, Megan Jones made an immediate impact in the world of catfighting. Her determination at such a young age led many veterans to opt to retire rather than face someone with a never-ending motor and never-stifled mouth. She lived up to all of the hype she created and led a legacy that few can can be compared to.

“When you grow up, like I did, you know that challenging someone means you are taking your life in your own hands. When I challenge someone to a fight, I’m willing to fight to the end and I know I can take her.” – Megan Jones 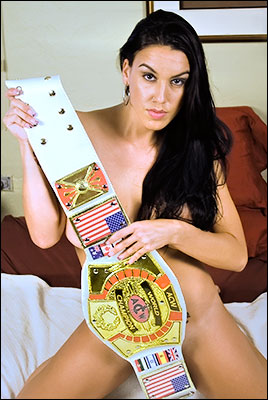 Megan was born in Havana, Cuba and migrated with her family to Miami, Florida when she was four years old. She faced many of the challenges that confront most immigrant children when they come to the United States and learned that she had to take care of herself at an early age, fighting for respect amongst her peers. It helped that her older sister Kristin was going through the same thing. The two often practiced fighting against one another and amongst their friends. “When we got older and hung out with guys, we watched pro wrestling and MMA matches with them and used a lot of the moves when we practiced fighting. When we had a real fight, the bitches wanted to pull hair and windmill fight, so they didn’t know what to do when I put them in and arm bar or choked them out. But I did it to make sure than anyone watching knew not to fuck with me.”

Megan formally got into apartment wrestling by cornering Apartment Championship Wrestling founder Tanako X in a hotel room in Miami. She plead her case for getting a tryout with the promotion and impressed X with her passion and determination. So much so that he launched an open tryout for new talent in the state of Florida. Jones was the star of the class, exhibiting a strong style of wrestling and a willingness to do whatever it took to gain a win. She demonstrated the she was not afraid of showing nudity and showed no sexual inhibitions. In her tryout match against Jen Capone, she pushed Capone on her back, straddled her and backed her ass onto Jen’s face, smothering her and forcing her to tap out. “Jen was talking too much shit so I shut her mouth up with my ass.”

Jones career took off quickly as she frightened most of the newcomers and impressed veterans alike. “I don’t give compliments to anybody, but I think Megan is that good,” said ACW trainer and former champion Diane Hunter. “She’s got great size, strength and quickness. And she has a mean streak about her that she knows how to turn on at the right moments.  I think she could beat half the girls on the roster today.” And beat them she did. Using her power and her size, she brutalized her opponents. What she lacked in technical skill, she made up for with the sheer volume of her attacks. A brawler and a bruiser, she got a shot at the Inter-Condominium title belt and walked away with her first title. After a year of dominating the competition, she demanded a title shot against Daniella Cartier and overwhelmed the great champion in a match that was never close.

The youngest champion in ACW history, Megan didn’t slow down, but instead wrestled in more than 75 matches the next year, developing great rivalries against her sister, Kristin James, the beautiful All-American girl Katie Anderson, and her early rival, Jen Capone. Her winning streak continued until, rundown from her brutal catfighting schedule, as well as multiple cross-country promotional tours, she was defeated by Anderson.


Megan demanded an immediate rematch and lost again. At this point X forced her to take some time away to heal and gather herself. During her hiatus, Jones began feeling more and more run down and was discovered to be suffering from a form of cancer. After more than a year off, the cancer treatments that she endured were successful and she was found to be cancer free. While X and most within the promotion encouraged her to take another year off, Jones insisted on going after the title belt and defeated Katie Cummings to regain the ACW Championship. She is the current ACW Champion having defeated all comers for the past two years.

Megan Jones went from being a virtual unknown to becoming the ACW World Champion in less than 18 months. Her battle to overcome cancer and regain her title belt has put her into the company of the all time great catfighters in history.

Ability to Get Over
Promo Skill and Charisma

Combined Score from All Data Points